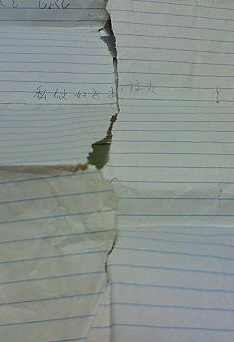 Do you think this is just a piece of shabby paper? It looks like that, but it is absolutely not. This is one of my treasures; my first love letter from my first girlfriend. Let me write about our story. I met her when I was studying in Oregon. She was from China. She and I were classmates in a speaking class of American English Institute (AEI) at the University of Oregon. We hit it off soon after we started chatting.
One afternoon, we were studying together in Knight Library of the university. And then I noticed she was writing some sentences on a piece of paper, using her electronic dictionary, but I had no idea what it was. When we left there for class, she handed the paper to me with a bashful look on the face. The minute I got it, I felt something. And then I tried to figure out why she had that look. After quickly reading it, I realized the paper was the love letter she had written. I was so excited I couldn't say anything to her because it was my first love letter in my life, and I still remember one Japanese sentence at the end of it; “Watashi wa suki anata” which means “I love you” in English. It was grammatically wrong but was clear enough.
Unfortunately, our love story did not last that long, and I came back to Japan, but we have been on a good term even now. I’m pretty sure I will never forget her.（Almost God）