The 'Ichimeter' was a familiar sight at Safeco Field during Ichiro's tenure. (AP)

Midway through the 2004 season, Amy Franz came up with the idea to bring an "Ichimeter" to games at Safeco Field as a way of tracking Ichiro Suzuki's progress toward breaking George Sisler's record of 257 hits in a single season. The Seattle Mariners superstar would break the mark with 262 that year with Franz's sign often being featured on television as the total climbed.

The original "Ichimeter" would land in the Hall of Fame after that '04 season, but Franz made sure that another version was a constant presence in the right-field stands as Ichiro continued to post 200-hit season after 200-hit season for the Mariners. Franz became a local celebrity of sorts, running a Facebook page for the sign, bringing it on road trips and even adopting an @ichimeterlady Twitter handle that reflected how she was known by many fans at Safeco.

Then, last July, Ichiro was traded to the New York Yankees. An era had ended in Seattle as had Franz's need to tote the sign to her seats in right field. The Yankees were in Seattle when the swap went down so Ichiro came over in his New York uniform to thank Franz for her support through the years and to autograph the Ichimeter. It was the final chapter in the Ichimeter story.

Only, it turns out that it wasn't. Franz received a special package on Tuesday afternoon and tweeted that she almost "passed out in the middle of the living room" after opening it.

Inside the package was a special thank-you note from Ichiro ... 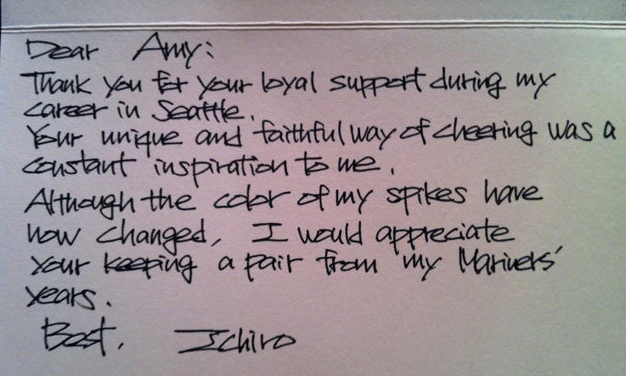 Needless to say, that's one of the best thank-yous a player has ever given a fan and just an all-around great gesture from Ichiro. While Franz made many fans over the years of dutifully bringing the sign to her seats, it turns out her biggest fan may have been Ichiro himself.