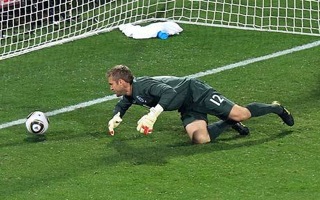 Steven Gerrard had given Fabio Capello's men a dream start against USA with an early goal at the Royal Bafokeng Stadium, but England were sent back to square one when Green fumbled Clint Dempsey's unthreatening shot five minutes from half-time.
"Of course I feel for him," Howard said after collecting the man-of-the-match award for his World Cup display.
"He has made a couple of really good saves and, as we have been saying all week, this ball is doing silly things.
"Unfortunately at this level, sometimes these things are going to happen. I feel terribly for him but when you are goalkeeping you have to have broad shoulders."
Green was well positioned as he went down to stop the ball, but it slipped off his gloves and rolled into the net to make it 1-1.
He was visibly deflated after his horrendous mistake, which silenced the thousands of England fans.
Asked about his equaliser, Dempsey said: "It's one of those that you see and people say, 'How come that never happens to me?"'
"Finally, it's a goal that probably the keeper should have made a save on. They all count the same when they go in."
http://www.telegraph.co.uk/sport/football/world-cup-2010/teams/england/7824001/England-v-USA-Tim-Howard-feels-for-Robert-Green-after-World-Cup-blunder.html